Personal menu
Back to all

For years, fast food workers have been striking in cities across the country to demand a living wage and fair working conditions. Occupational Employment and Wage Statistics for 2021 show the median fast food worker makes about $25,100 a year, which is about $12.07 an hour. These low wages force too many fast food workers to rely on public assistance programs like Medicaid and SNAP (food stamps) to make ends meet.

On Labor Day, Gavin Newsom signed AB 257 and California passed the Fast Food Accountability and Standards Recovery Act, also known as the FAST Recovery Act. Endorsed by the Service Employees International Union, this is the first bill in the nation working to implement specific workplace rules and standards for industry workers. The bill will set a 10-member Fast-Food Sector Council, who will be responsible for creating standards on minimum wages, maximum working hours, training, and other working conditions applicable to employees of fast-food establishments consisting of 100 or more locations nationally with customers who order and pay for food before eating.

Fast food workers have never been protected by collective bargaining power, making their demands for higher standards of living a historical event. It's difficult to make the case for fast food companies who have kept employees at poverty-level wages for years while earning billions of dollars in profits, increasing inequality and slowing innovation. Declining living standards hold back economic recovery and contribute to high poverty rates. The American Dream is a responsibility to the chance for every individual to achieve a better life from hard work and playing by the rules.

The U.S. Bureau of Labor Statistics defines a fast food worker as an individual who performs duties such as taking orders, handling the counter, cashiers, prepares pre-made food and drinks, and who may also wait and clean tables. As of May 2021, U.S. Occupational Employment Statistics report 3 million fast food workers earning on average $12.53 per hour or $26,060 annually.

Fast Food Restaurant Employees in California vs. Other States

California employs roughly 8% of fast food workers in the U.S., that's about 22 jobs per thousand in the state at an hourly mean wage of $15.61 and annual mean of $32,460–the highest in the nation. In contrast, Texas holds the second largest cohort of fast food workers in America with 350,500 workers, at roughly 29 jobs per thousand at a median hourly rate of $10.80 and annual mean of $22,460. While California is considered a more expensive state than Texas, the annual income for fast food workers in California is currently $10,000 more than in Texas, but still below living standards for a country like the United States. The median yearly income in the US is $44,225.

California is taking the first step to improve the standard of living for individuals earning a living working at a fast food restaurant and supporting the billion dollar fast food industry. 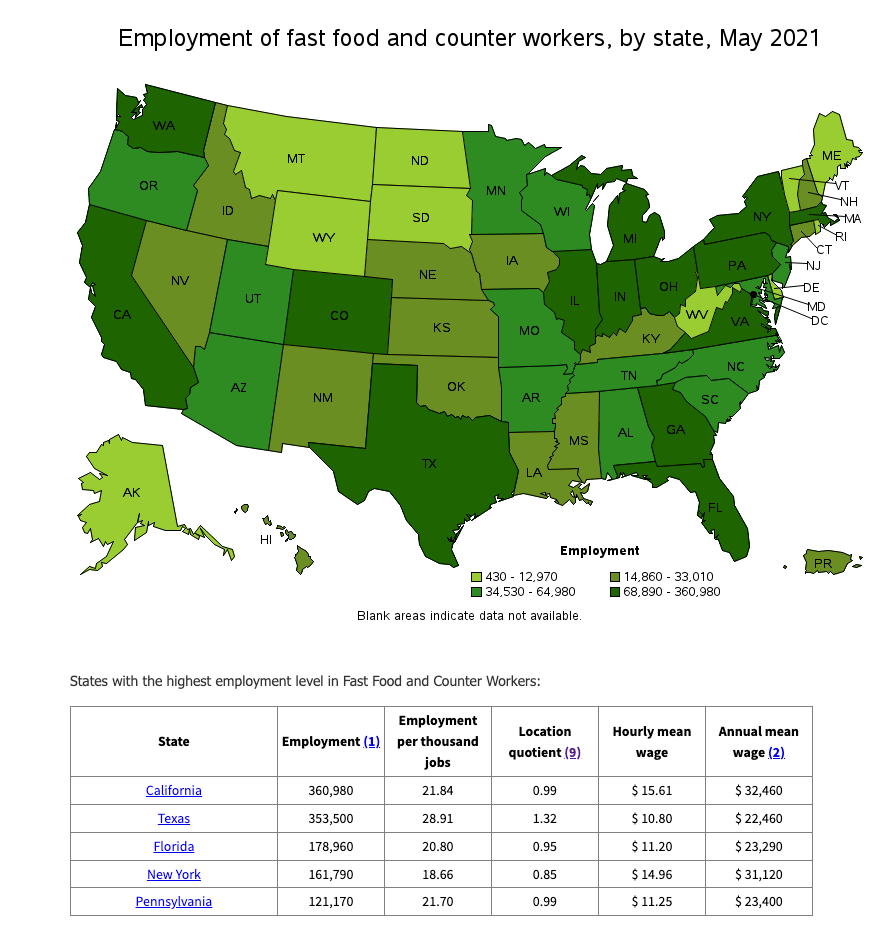 The late Barbara Ehrenreich, best known for her 2001 bestselling book Nickel and Dimed: On (Not) Getting By in America, revealed that 'when someone works for less pay than what's needed to survive, they have sacrificed for others by giving up food, health, and life. The working poor, those who are praised for their generosity, are actually the biggest benefactors of our society. They neglect their own children, live in substandard housing, and endure privation in order to keep inflation and stock prices low. By being a member of the working poor, you are an anonymous donor and an anonymous benefactor to everyone else.'

Cooks in fast food restaurants suffer from the worst mortality rates, particularly Latinx workers, who have the highest rates. On the job, workers have been injured at least once a year for as much as 87 percent of workers, and 90 percent admit that they have been forced to work off the clock, denied breaks, or denied overtime pay. At least 12 percent have been assaulted on the job, and 40 percent of women working in the sector have experienced sexual harassment. Wage theft is the most common form of theft, with 85 percent of California fast food workers having experienced it. In California, workers have stolen as much as $150,000 in wages over the last decade. As a result, two-thirds of fast food workers are either on public assistance or have a family member who is, resulting in statewide expenditures of $4 billion and $1.2 billion in Los Angeles County alone.

Fast food restaurant job hazards can be grouped into different categories, such as:

The Path Forward for the Fast Food Restaurant Industry

The fast food industry is a hugely popular and profitable one, and California's FAST Recovery Act (AB 257) is a positive step towards normalizing minimum wage and worker dignity via a Fast Food Council. Gavin Newsom showcased it as an example for other states to follow. As California’s fast-food workers continue to demand higher standards and better working conditions, more and more fast food companies will increase their minimum wages and follow better business practices. This sets the stage for other states like New York, Illinois, Colorado, Oregon and Washington to work on ensuring that every fast food worker is treated fairly and compensated fairly for their labor.