Personal menu
Back to all

The advent of AB 257 is a positive step towards normalizing living wages, dignity, and employment standards in a very popular and profitable industry. For many years The California AFL-CIO and the Fight for $15 have been organizing fast-food workers to improve their standard of living.

On Labor Day, Monday September 5th, 2022, Governor Gavin Newsom signed AB 257 into law, stating, "Today's action gives hard working fast-food workers a stronger voice and seat at the table to set fair wages and critical health and safety standards across the industry. It has already been signed into law by both houses of the California State Legislature."

CA will soon have a Fast Food Council that will include workers and our advocates who will sit down w/gov reps and business to set standards for over 550,000 California workers.pic.twitter.com/pAhjd26awS

Workers in the California fast-food industry have long reported being retaliated against for speaking out about poor working conditions, as well as being paid below-average wages. A study from the University of California San Francisco and the Shift Project, shows that fast-food workers earn $3 per hour less on average than workers in other service sectors. Since the cost of living is higher in California, this amounts to over $6,000 annually in lost wages for fast-food workers.

AB 257, labeled the FAST Recovery Act, impacts more than 30,000 California worksites and improves working conditions for the more than 550,000 fast-food workers in the state. It will first raise the $15 minimum wage by 50 cents on January 1, 2023. The bill establishes a FAST Act council with the power to then set hourly wages at $22 per hour and raise them in accordance with inflation, up to 3.5% annually.
The AB 257 bill covers fast-food establishments with over 100 locations nationally that provide food or beverages for immediate consumption on or off premises and with standardized decor, marketing, packaging, products, and services that must comply with the bill's requirements. Throughout the bill, 'immediate consumption' refers to customers who order and pay for food before eating, items that are prepared in advance or that are prepared or heated quickly, and limited or no table service.

What is the FAST Food Council under AB 257?

The FAST Act council is made up of 10 members of fast-food workers, worker advocates, franchisors, franchisees, and public officials to establish wages and workplace standards for the fast-food industry in California, working to also protect workers from retaliation. These 10 members will be appointed by the Governor, the Speaker of the Assembly, and the Senate Rules Committee.
The FAST Food council will establish minimum fast food restaurant employment standards, including wages, working conditions, and training, and will issue, modify, and eliminate any other rules and regulations necessary to fulfill its obligations–made possible by a petition signed by 10,000 fast food restaurant workers.

A local council may be established in cities or counties with populations greater than 200,000 to provide advisory services to the FAST Food council. In California, there are at least 20 cities and nearly 30 counties, so many smaller councils may soon be operating across the state.

The lobbying power of big corporation fast-food chains have kept wages for millions of fast-food workers to below standards for the level of productivity this workforce provides. If wages had kept pace with American workers' prodigious productivity since 1975, the minimum wage would be $21.50 an hour.

The International Franchise Association (IFA), which represents 1,200 fast food chains including McDonald's, Wendy's, and Papa John's, has harshly criticized AB 257 by stating that the problem does not exist. In contrast, McDonald's is among the top 5 employers with workers relying on food stamps while the company approved over $3.4 billion in share buybacks for investors since March 2020, averaging $865 million in buybacks per quarter over the last five years that could have been invested increasing wages and providing job training.

Chipotle, Yum Brands, Chick-fil-A Inc., In-N-Out Burgers, Jack In The Box, and Burger King have spent more than $1 million lobbying lawmakers against the bill, and the International Franchise Association has spent $615,000.

California Empowers The Evolution of the Fast-Food Industry

For today's hard working Americans, a fast-food restaurant is an easily accessible option when dealing with busy schedules and needing a low cost meal. It's easy to find a fast-food restaurant in modern cities across the globe, from McDonalds and Burger King to KFC and Taco Bell. This globalization of the fast-food restaurant has led to externalized costs to the environment and humanity, such as the climate footprint of animal agriculture, the health risks associated with frequent consumption, and harsh working conditions and low wages for millions of fast food workers.

The bill allows the FAST Act Council to establish the minimum standards for minimum wages, maximum hours of work, and other working conditions in fast-food restaurants, and requires the California Division of Labor Standards Enforcement to enforce them.

Furthermore, AB 257 allows the FAST Act Council to set the minimum wage for fast-food workers higher than the California minimum wage. The state minimum wage may not rise above $22 an hour in 2023, which will be nearly $7 higher than the current rate. It will thereafter increase at a rate of 3.5% or the Consumer Price Index rate of change into the future.

American culture has been associated with fast-food restaurants since White Castle opened its doors in Wichita, Kansas in 1921. Every inch of the White Castle grill was dedicated to either bread or beef in tiny, square patties, which was prepared quickly in a highly mechanized, highly systematized way. This fast-food model was built in such a way that it captured the public's attention. There were efficiencies built into it that really spoke to the era's fascinations. Customers' demands for the same meal each time and an identical experience are now dismissed. However, these demands were once considered critical to the experience. 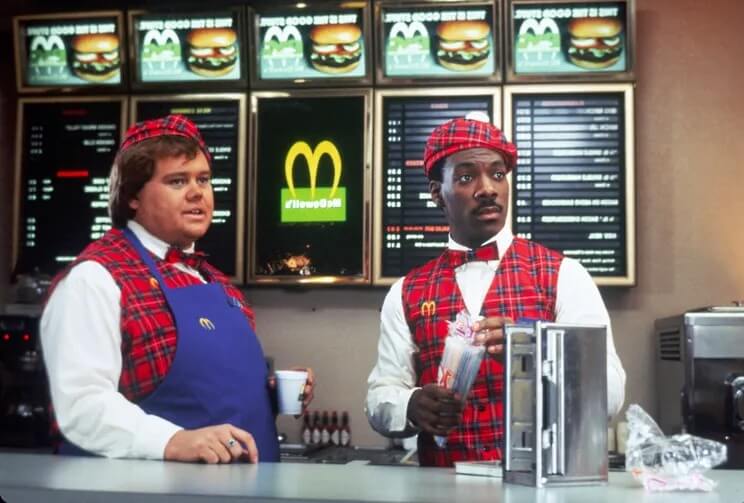 Since then fast-food isn’t just something we eat; it’s also a culture that infiltrates every aspect of our lives, including movies. America's obsession with chain restaurants is fed by fast-food. Big screen moments like Eddie Murphy in a McDonald-esque fast-food joint in Coming to America, Sandra Bullock explaining Taco Bell's survival of the franchise wars in the dystopian future of Demolition Man, and Pulp Fiction's "royal and cheese" scene prove that fast-food’s impact goes well beyond the drive-thru.

With the world's oldest-operating McDonald's fast food restaurant located in Downey, California, it's no surprise that Hollywood captured the essence of American culture during the fast-food era. California accounts for 14% of nationwide fast food sales and the foundation of fast food culture.

The fast food industry is a hugely popular and profitable one and AB257 is a positive step towards paying down society's debt to fast food workers by normalizing living wages and worker dignity. Beyond California, the FAST Act may have significant repercussions for the fast food industry with similar legislation likely in states like New York, Oregon, Washington, Illinois, and more.